Food Around the World: Russia 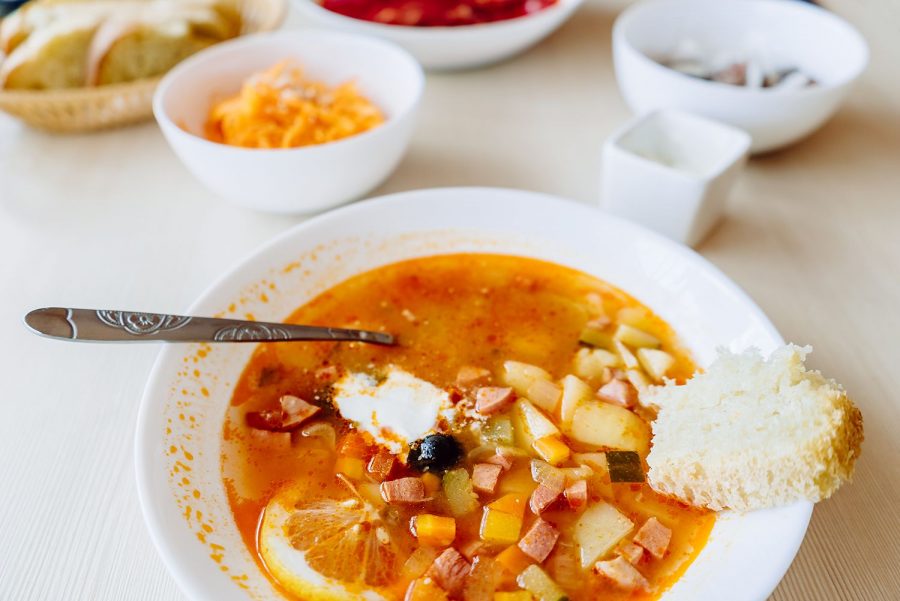 When the words ethnic food are thrown around, the countries that almost immediately come to mind are nations like China, France, and Mexico, but not Russia. Perhaps the image of the beet soup borscht appears in the minds of some, but for most, Russian cuisine draws a blank slate. Yet the Russian cuisine is full of interesting dishes that often reflects European and Asian food characteristics due to Russia’s unique position of being in both continents.

Featured most prominently in Russian food culture are soups, which are split into cold and hot varieties. Among the cold soups is okroshka which is made by combining two vegetables with cold boiled meat or fish in equal proportions. The vegetables used vary, but normally one vegetable is of a bland taste, such as boiled potatoes or turnips while the other vegetable has more of a sharper taste, such as green onion. The protein source fluctuates from region to region in Russia, with geography playing a role as to whether fish or meat is more convenient. As a result of the equal proportions of each ingredient, okroshka functions both as soup and salad. Hot soups include the thousands of years old cabbage soup shchi. Shchi has two required ingredients, cabbage and a sort of sour component, such as apples or pickle juice. Other versions of shchi might have more ingredients which might involve meat, carrots, or spicy herbs.

Desserts of Russia include pirozhki and blini. Pirozhki are buns made of yeast which are stuffed with a filling. The more common fillings are sauteed mushrooms or cabbage, mashed potatoes, or boiled meat. Blini can be thought of as similar to crepes, that are topped with fruit spreads or sour cream. Blini has a special religious connection to Russia, dating itself back to pre-Christianity Russia, where Old Slavic religions revered blini as representative of the sun.

While the reputation of Russian cuisine may not be famous, it is full of a bunch of delicious items waiting to be eaten! Why not give some of them a try? Search for Russian restaurants near you or try to make your own dishes from recipes online. Expanding your food horizons might just be one of the best things you ever do!